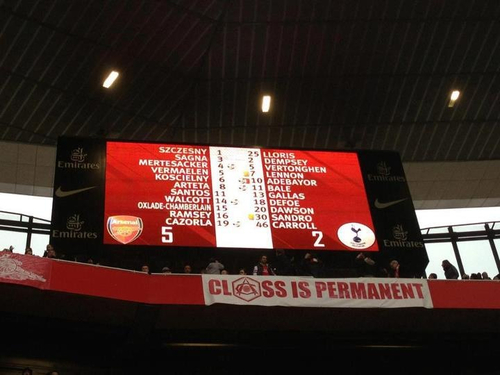 Well we can’t really complain about that! Although why can’t the Emirates be that loud every home game? Imagine that crowd support cheering on our lads each match, imagine what that could do for our confidence issues! It’s always nice to get one over on Spurs and to do it by the same 5-2 scoreline as last time is just, delicious. While Wenger deployed the lineup I had anticipated in my preview, Villas Boas pulled a few suprises firstly by choosing to play a 4-4-2 formation to give more width and apply pressure on Arteta and Wilshere man to man, then also by benching Dempsey for Adebayor and Friedel for Lloris while bringing Vertonghen central and starting Naughton on the wing. The biggest problem for us initially however was how physical Sandro played in the center, bullying our midfielders and committing many cynical fouls to break up play and destroy any rhythm we were trying to build. I can’t fault him for doing this we have our own smiling assassin in Arteta who’s a master at giving away cheeky innnocent fouls without being booked and effectively stopping the opposition’s attacking opportunity. Speaking of Arteta, he was once again targeted and closed down to an extent before the red card which changed the game and this double pivot still needs a lot of work before we get it going. I do believe if Adebayor hadn’t been sent off then Sandro may have found himself on a yellow pretty early in the match and this would’ve definitely impacted his influence in this match and allowed Arteta more freedom.

It’s also getting increasingly annoying to watch our team take to the field as if they just rolled out of bed. Once again we conceded early on thanks to this, Sagna was caught too high up the pitch and Mertesacker was easily turned by Defoe. Looking at the match, Koscielny and Mertesacker while being an effective pairing, played very much as a left and right Center Back, meaning they rarely crossed over. I think it was a tactical error to do this as it meant that Defoe could use his pace and trickery to target Mertesacker as a weakness. In most games Koscielny plays as the interception player and Mertesacker as the anchor and offside marker but for some strange reason this didn’t happen. If instead Koscielny had been given the task of man-marking Defoe I believe we could’ve prevented the 1st goal as he would’ve had the pace and agility to track Defoe’s movement, while Mertesacker vs Adebayor would’ve been a ‘battle of the tallest‘. These heat charts show what I mean by saying they kept to one side.

It’s almost a shame that Adebayor was sent off(and rightfully so) because I think Arsenal were beginning to get into the game. I’d feel more sorry for him if the idiot hadn’t once again jumped over the barriers to piss off the Emirates crowd after scoring the opener. His sending off was to blame for the 1st goal we scored certainly since there’s no way Mertesacker would’ve ventured that high up the pitch to score from a header if there’d still been an extra man on the pitch to mark but whether they had 11 or 10, Giroud’s movement upfront was excellent and gradually undid the discipline in Spur’s backline. He either bullied them or pulled them out of position with his intelligent movement as if they were puppets on strings and at times he was damn near unplayable for the likes of Gallas,Vertonghen and Dawson. Theo Walcott’s movement and determination on the right was also great although a lot of credit must be given to Sagna for his support role. Sagna had a poor game defensively but going forwards, Naughton was simply overrun on this wing and not at all helped by the fact Gareth Bale refused to drop deep to help defend and seemed content to sulk on the half way line when not in possession. Adebayor being sent off made it hard enough for Spurs without Bale making it seem like they only had 9 players in defense. Vermaelen on the left wing also played a very solid game at left back, aided by Podolski’s defensive efforts and in general he kept Lennon pretty quiet throughout the match. It’s really encouraging to see Vermaelen play well there as I fear that with Gibbs’ injury now pronounced “long term” we will be seeing him play there a lot. The fact that in this match he started to play wide makes me optimistic for the future that he might just be able to work in this role and with a growing chemistry with Podolski, turn the left wing once more into the major attacking threat it was at the start of the season. It will also mean that Koscielny remains partnered with Mertesacker in the center and that can only be a good thing.

The major worrying thing in this game that was very noticeable in the second half was Arsenal’s inability to simply CLOSE DOWN THE MATCH. I’d rather win 3-1 than concede another bloody goal. Wilshere was a necessary driving force in the 1st half but I breathed a sigh of relief when Wenger subbed him off for Ramsey after we conceded yet another goal. It seemed blatantly obvious that at halftime AVB chose to switch to a 3-4-2 and chase the game back to a draw. Tottenham were now setup to press and counter-attack us and while it may have blown up in his face, the tactic worked to a certain degree and had it not been for those late goals before halftime we may have been in for a close match. When the opposition has an explosive player like Gareth Bale you simply cannot play full throttle the way Arsenal chose to. They were queuing up to score and meanwhile leaving massive gaps in the defensive lines, one of which Bale took advantage of with a good finish. Arsenal needed to keep their heads and simply keep possession in midfield, pass the ball around without trying to force a chance on goal and keep Spurs chasing shadows.Wilshere was still pushing ever forwards instead of dropping back to help Arteta keep possession(the impetuous nature of youth!)  and Wenger bringing on Ramsey who is embarrassingly almost a veteran player for us at 21 years of age, was a tactical masterstroke that calmed the midfield down and helped us keep our heads. Some will complain that he slowed our attack down and cost us more goals but that’s exactly what Wenger wanted, further reinforced by taking off Giroud and signalling the end of the attack, even if Chamberlain didn’t take the hint and pushed too hard. For the ones still moaning that we could’ve scored more goals if not for players like Ramsey and Santos coming on, slowing down our play and keeping possession is the reason we scored a 5th. Spurs were forced to chase the ball, come out of their defensive shell and make mistakes which we then effectively counter-attacked them on when Chamberlain stole the ball for Walcott’s final nail in the coffin goal.

So overall I’m happy with the team performance, Giroud was a beast(my MOTM) and just gets better with every game like a rough cut diamond that you just keep shaping and polishing to greater levels of perfection. Wilshere worked fairly well in the double pivot with Arteta but still isn’t dropping deep enough to help Arteta with his defensive duties for my liking although with Spurs a man down and still returning to fitness I can understand this to an extent. Arteta meanwhile was his usual metronomic self despite being obviously targeted by Spurs and every other team we’ve faced recently and he still had 118 touches to Wilshere’s 45 with a higher passing accuracy of 89% to 81%. Perhaps we should spend this summer’s transfer budget on a shiny cybernetic body for Diaby? He really was the perfect compliment to Arteta in the pivot. Vermaelen showed promising signs in the role of left back, finally playing wide(although not all the way  to the corner flag yet) and allowing Podolski to shine as an inside winger once more. Santos also acquitted himself well in the left winger position, something I’ve been trying to encourage for awhile now and Walcott continued to make his case for a higher wage with a great performance. Koscielny was his usual beasty self at the back, ice cold with no mistakes and I think the entire back line drew confidence from having Szczesny back in goal, already achieving a better distribution accuracy than Mannone has managed, although Vermaelen’s heavy backpass in the first half was a bit concerning! He nearly bloody scored..

So I’ll leave you with some happy images from the game and videos of the goals while we look forward to our mid-week appointment with Montpellier to automatically qualify from our Champions League Group. Until then enjoy the win and COYG! 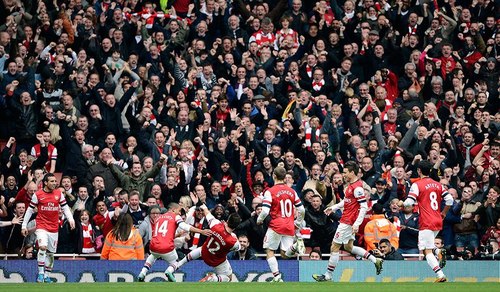 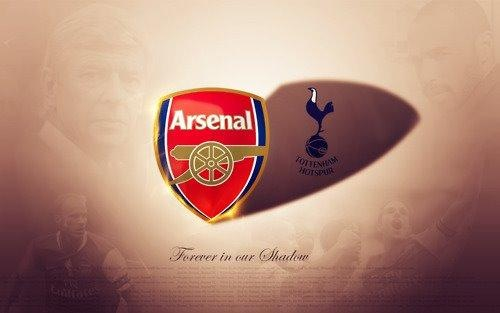